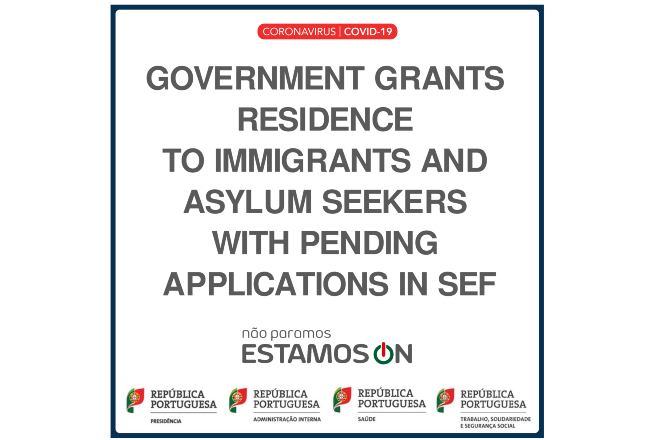 COVID-19: Government grants residence to immigrants and asylum seekers
The Portuguese Government, under the extraordinary measures issued to mitigate the COVID-19 pandemic, decided to grant residence to immigrants and asylum seekers with pending applications in the Immigration and Borders Service (SEF), granting them the same rights and support. The SEF establishments are closed and walk-in appointments conditioned to urgent cases, from 30 of March of 2020.
adicionar aos favoritos imprimir
The Government’s official Order published in “Diário da República” on Friday, 27 of March of 2020, established that immigrants and asylum seekers with pending residence applications in SEF are granted residence status, until 30 of June of 2020, and have access to the same rights and supports, including health, social support, employment and housing.
"In order to address the specific nature of the threat of contagion by COVID19, the management of appointments and schedules should be carried out so as to safeguard unequivocally the rights of all foreign citizens with pending cases before the Immigration and Borders Service (SEF), by making sure that at the time when the National State of Emergency is declared, they stay legally on national territory”, according to Order No. 3863-B/2020.
In declarations given to Agência Lusa, the Secretary of State for Integration and Migration Cláudia Pereira highlighted that the measure resulted from the concern of the Government to “be there for those in a particular vulnerable situation”, stating that “it is extremely important in order for migrants in this period of state of emergency and of covid-19 to be able to have access to all the support they have a right to”.
Cláudia Pereira also guaranteed that “this measure covers all of those who have initiated the process” and that the measure is only valid during the special regime of the Government, resulting from the covid-19 pandemic.
“There probably aren’t many that have not yet initiated the process [in SEF], considering the reduction of travelling, however we are alert to these situations”, she assured.
Migrants that have not yet done so can submit the applications during the State of Emergency, and while they will not be covered by the regularisation of documentation measure, they will keep the right to health care.
SEF establishments are closed and walk-in appointments are only for urgent cases
According to a communication of the Ministry of Home Affairs, from Monday, 30 of March, a plan was set into motion that foresees “the closing of all SEF establishments, from the same date, considering the need to reduce the risks to public health associated with personal appointments, both to SEF workers and to the users of those public services themselves”.
"The documents attesting the situation of citizens are those applications submitted under Articles 88, 89 and 90-A of the legal regime of entry, stay, exit and removal of foreign nationals from national territory, a document for expression of interest or an application issued by the registry platforms in use in the SEF; and the requests for concessions or renovations of a residence permit, either under the general scheme or under the exceptional arrangements, a document attesting to an appointment at the SEF or an acknowledgement of receipt of the application”, is stated in the communication.
On the other hand, “documents and visas relating to stay on the national territory, whose validity expires after 24 of February are valid until 30 June”, and these documents, as well as the Citizen Card, Driver’s License, Criminal Record and Certificates “are deemed valid by public authorities in all their legal effects”.
Furthermore, in-person appointments will be provided by SEF “only for cases considered urgent, such as, citizens who need to travel or who prove the urgent and unavoidable need to leave the national territory for unexpected and unavoidable reasons and citizens whose documents have been stolen, robbed or lost”.
The President of the Republic declared State of Emergency on 18 March of 2020, “justified by the situation of proven public calamity”. The State of Emergency has been declared throughout the national territory for a period of 15 days, starting on 19 March 2020 at 0:00 AM and ending on 2 April 2020 at 11:59 PM, without prejudice to possible extensions.
Read also the article "COVID-19: Foreign citizens with pending cases before the SEF – Practical Guide and information leaflet"
Related news:
. “Covid-19: Imigrantes que nunca deram entrada de processos têm direito à saúde – Governo”, Agência Lusa, 28 March of 2020
. “Alterações no atendimento ao público do SEF”, Serviço de Estrangeiros e Fronteiras (SEF), 28 March of 2020
. “Governo regulariza todos os imigrantes que tenham pedidos pendentes no SEF”, Público, 28 March of 2020
. “Portugal to treat migrants as residents during coronavirus crisis”, Reuters, 28 March of 2020
. “Coronavirus: Portugal grants temporary citizenship rights to migrants”, Euronews, 29 March of 2020
. “Le Portugal traitera les migrants comme des résidents pendant la crise des coronavirus”, News24, 28 March of 2020